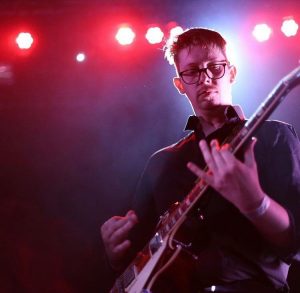 This week Jethro talks with Rob Roblou over a phone call, about his band Scriptures and about much more of his journey in life to get to the sage of releasing the band’s 3rd album. Rob is an ex music studies student of Clarendon College, so we also got talking about music production, and what it is like in the media industry in these crazy times

Notts Hard rock band Cottonmouth have announced a new single, titled Hollow, for the 9th of October. The song, following on from their last single, Made of Stone, should be a thunderous, headbanging riot of a track. Check them out on band camp at the link below:
https://cottonmouthuk.bandcamp.com/merch

Raised by Owls have started up a twitch! You heard right, Raised By Owls will be streaming every Thursday and select Saturdays playing the worst games the PS1 has to offer. So far they’ve played such… Classics as Barbie: Ride and Race (the most heavy metal game obviously), Simpsons wrestling and Hooters Roadtrip. May I suggest a go at WCW/NWO Thunder next?
https://twitch.tv/raised_by_owls

The Small Town Boys are giving us a sneak peak at their upcoming album People Pleasing People. They will be unveiling 2 tracks from the album on the 1st of October at 7pm. The album, tracked at Electric Bear in Mansfield, is gonna be one of the hottest ones of the year if I had to guess.
https://m.facebook.com/thesmalltownboys/

Thrash throwback Dark Matter have put out a new single, titled Panic. Big love from the team on this one, with blistering guitars and precise vocals galore, once live shows are back and in full force this is one I’d certainly part with my cash for
https://m.facebook.com/DarkMatterNotts/

Isla have released a banger as their next track, titled Don’t Love Me. The bass on this one is something else, bringing vibes of Queens of the Stone age to mind alongside some Biffy Clyro comparisons. Show them some love!
https://www.facebook.com/weareisla/posts/

And finally, in a little bit of left field news, Nottingham wrestling promotion and academy House of Pain, owned by British heavyweight superstar Paul “Stixx” Grint have released the first episode of season 2 of their YouTube series! If you want to be entertained by rock and roll personality, electric matches and some good damn storytelling by locally trained talent then the link to their YouTube will be below.
https://m.youtube.com/channel/UC9WX85uKWcrxyX4fufXC7PQ

Search for “The Imperial Dragon” on all social media.

Check them out here https://www.facebook.com/DarkMatterNotts

Check them out here Facebook.com/scripturesuk